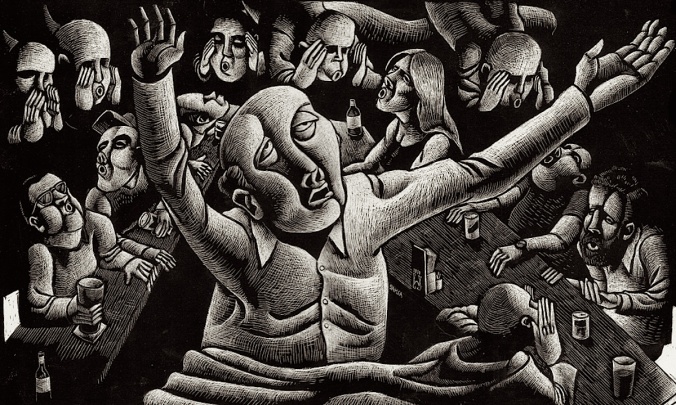 When it comes to rendering outstanding album artwork, few have proven so consistently capable as William Schaff.

The stunning and significant work of Schaff is closely connected to the visual imagery of indie veterans Okkervil River, who, with the exception of 2016’s Away, have used Schaff as their main contributor throughout their entire career. But William Schaff is also responsible for creating iconic cover art for the likes of Godspeed You! Black Emperor, Jason Molina and many others. As such, we aim to pay a humble tribute to William Schaff with this graphic presentation on some of his musical work from 2000 and up until today.

A graduate of the Maryland Institute College of Art, William Schaff is now based in Warren, Rhode Island where he resides in a large house inherited from his late father, one that, having been threatened with foreclosure on numerous occasions, is affectionately called Fort Foreclosure. (So if you ever thought making visual art is a luxury business, think again and consider donating some bucks in order to keep Fort Foreclosure and the artistic visions within it up and running.)

While playing with various excellent bands (The Iditarod, Black Forest/Black Sea), Schaff ran into Canadian post-rock stars Godspeed You! Black Emperor in Montreal, resulting in the aforementioned group’s use of Schaff’s art for the cover of their now-legendary Lift Your Skinny Fists Like Antennas to Heaven. Such offered Schaff a proper window into the music business and soon after an initial meeting with Okkervil River’s similarly named Will Sheff (and yes, people tend to confuse the two) would bloom into a longterm professional relationship, as well as a friendship.

Making art for such highly  profiled bands over the years has rightfully garnered increased interest in Schaff’s work. More than most, Schaff is an artist who’s managed to give visual pleasure to gorgeous music with great consistency over the years.

In 2012, Graveface Records published the book From Blacksheep Boys to Bill Collectors: The Music-related Artwork of William Schaff, including a 10’’ record of previously unreleased songs by Jason Molina – the last of his music to be released during his life.

Godspeed You Black Emperor:
Lift Your Skinny Fists Like Antennas to Heaven
(Constellation/Kranky, 2000)

Okkervil River:
Don’t Fall in Love with Everyone You See
(Jagjaguwar, 2002)

Okkervil River:
Down the River of Golden Dreams
(Jagjaguwar, 2003)

Kid Dakota:
The West is the Future
(Chairkickers, 2004)

Swearing at Motorists:
While Laughing, The Joker Tells The Truth
(A Recordings, 2014)