2014 was a great year for London-based electronica trio Years & Years.

Climbing the charts with songs like “Take Shelter” and “Desire”, and playing featured artist on The Magician’s “Sunlight” and Tourist’s “Illuminate”, the group secured a deal with Polydor Records.

2015 will most certainly bring one of last year’s rising names closer to the stars: In January they won the highly prestigious BBC Sound of 2015, and they’re currently nominated for this year’s Brit Awards, held on February 25. With their shiny Y&Y EP out now, their debut full-length is set for release later this summer.

I caught up with the three talkative, cheerful chaps – Olly Alexander (vocals, keyboards), Mikey Goldsworthy (bass), Emre Turkmen (synths, beats) – for a coffee table chat that covered their growing recognition, being inventive, and their expansive interests in music, from modern dance to classic rock.

For some you’re still a pretty unknown act. How will you describe Years & Years for a new and curious listener?

Olly: We make electronic dance music that has bit of an emotional personality to it, music you can dance and sometimes cry to. [laughs]

So it’s music both for you head and feet, then. How’s the climate for thinking man’s electronic music in the UK these days?

Emre: It’s great, but I don’t think of music in terms of countries any more. With the Internet and stuff it’s really different now. Even when we were completely unknown we had people that listened to our music from Brazil, Mexico, Poland… Music is global, but London is definitely the place to be for us. It’s full of music and creativity, and it’s always alive.

How does that energy channels into your music, I mean, do you feel like you’re part of a scene or something?

Olly: Well, I don’t know. People come to London for a number of reasons. Mikey moved from Australia to London, I got here from the countryside and Emre has spent more time in the city, but we met each other because we all moved to London. I think that’s in itself is an example on how a city like London breeds creativity, and bands tends to form in those places.

I heard that you guys also bonded over a common fondness for Radiohead?

Emre: Yeah, that’s true. It’s not like we sound like them or anything. There are all kinds of things you pick up from bands without necessarily trying to rip them off sonically. But they’re cool, inventive and they change a lot.

We sound very different now from when we started, and hopefully we’ll sound different if we ever meet again in five years time. We get bored easily, spending all our money on gadgets. We spend it on gadgets, food and synthesizers. [laughs]

Are being inventive a key phrase for you?

Emre: Definitely. I think that if you are inventive, then you have a personality to your music. Music spurs expression and you want to express who you are. The three of us have come to a place where we all contribute different things to our sound and the way we make music. It’s really important that it’s us, so we always try to be involved with every aspect in what we do – be it music, videos, live shows, or whatever.

And it seems like you have done some right moves along the way. Congratulations on winning BBC Sound of 2015, in competition with Rae Morris, Kwabs, Soak and others. What did that award mean to you?

Olly: It’s really overwhelming. Before we won, I have always looked at the sound poll myself, knowing how prestigious and great it is being such a great component of new music and new talents; so even to be on the list was really exciting.

Since winning it has been a definite change. We made the news. We went from being a band that some people had heard of in the UK to being a band that people were talking about in the UK. But it doesn’t guarantee you anything winning an award like that. You have to make the most of the platform that’s given you. We are really grateful, but now it’s up to us.

You’re also nominated for the Brit Awards, as the Critic’s Choice for Breakthrough Act of the year – along with James Bay and George the Poet. How do you feel about that one?

Olly: It’s similar. We just have to thank when an institution backs you, saying, “we’re picking you, and we think you’ll be great”. It’s great but equally quite scary, with a pressure to deliver. But at least we get to go the awards and have us some cocktails at the party. And Madonna is coming! [giggles]

Has this pressure that you mentioned changed anything for you within the group?

Mikey: It hasn’t changed what we do or the way we do it. We’ve always been pretty self-sufficient in many ways. We make and play our own music, used to record at home and make our own videos. A great upside is that we get more people listening to what we do, meet cool people along the way, and see how they do it and maybe work with them. All this cool stuff we wouldn’t get on another level.

So it hasn’t changed what we do and the way we do it, but it has made us more conscious. We take it a bit more serious now. But not in a boring way. We’re actually thinking that we can be a really good band. [laughs]

You’ve have recently been working with artists like The Magician and Tourist. If you could choose your dream cast to work with, whom would you pick?

Your debut album is finished and will be released later this summer. What can you share, any new collaborations to expect?

Emre: No, not on the album – it has been an in-house operations. But yeah, it has all our singles on it, older songs together with brand new ones. We’ve been a band for a long time, and had lots of time to think about this album. You know what they say: it takes a lifetime to write your first; it’s the second one that’s hard. You can expect some energetic singles in there, but also some slower, more introspective numbers. 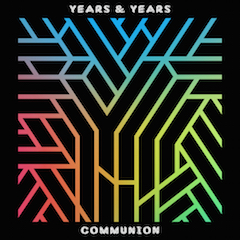 What’s your view on the album format? Do you think of it more like a set of songs in a row or do you consider the album more as one piece, a unique entity?

Olly: We made this collection of songs from the last few years that shares a certain sound, a similar idea that fits into a body of work. I guess most of the songs have a similar sound to each other, but then you’re becoming aware of something that might not fit with the album – but you need to have a body of work to know what that is.

Mikey: Yeah, it’s a different thought process. Before, we would never think of things that way, we just made music and didn’t have to consider whether it all fit in one body of work. Now we have to think about it as one album, and be a bit more precious. But it doesn’t have a specific theme or concept, so it’s certainly not a concept album.

Emre: And also, this is our debut, so hopefully as we progress we’ll find different ways of working and thinking, sonically or the way we write. We don’t ever want to do the same thing over and over again.

And sonically speaking, how will you describe the recording process?

Olly: We’re concerned about everything. We take care in every single detail of the production, and have been spending hours and hours to flick on just one note. But it’s your baby, right. The arrangements are as important as anything else in the creative process. But the most important is the song, though. Once you have that right, then you really can start having fun with it.

What do you write about?

Olly: Oh, it’s all about me and my life, he said selfishly. [laughs] You know, the classic themes of heartbreak and rejection. That’s all I know, really. Maybe I should try to write from a third person perspective, like the great storytellers. It’s not that common in popular music, being less immediate and difficult to master. Like John Lennon did. Or Tom Waits, he can tell a story. Bob Dylan. Nick Cave is a great storyteller.

You namedrop some classic artists here, you still buy albums?

Olly: Oh yeah, and we still pay for them! I actually just started buying a again, in order to enjoy to a full body of work.

So, you guys have any favorites?

[All together:]
– Harvest by Neil Young.
– In Rainbows by Radiohead.
– What’s Going On by Marvin Gaye.
– Until the Quiet Comes by Flying Lotus. Siamese Dreams. Grace. Innervisions. Ritual Union by Little Dragon. Blue. Off the Wall….

One day in the future, they might be name-dropped by a young band themselves. Until then, tune into Years & Years yourself.