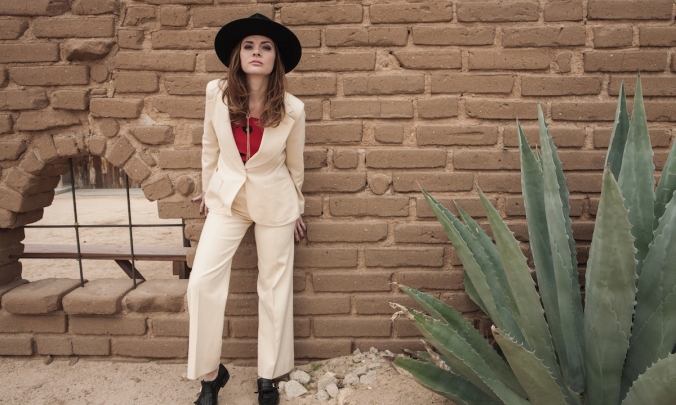 Santo and Walker, the latter of whom has worked with the likes of P!nk, Carly Rae Jepsen, Keith Urban, Frank Turner and more, first worked together on Walker’s 2016 album Stay Gold, around the time when Suzanne Santo started to explore her own identity, ignore genre boundaries and defy expectations. “He facilitates a great time and an artistic environment that orbits solely around what’s best for the song, which is so rare in a business full of egos,” Santo says of Walker. “Butch and this environment liberated and enabled me to work in a way that I never knew I was capable of.”

On her own, she delved into a new type of songwriting inspired by, amongst others, Erykah Badu, Alabama Shakes and David Bowie – one that Walker is most fond of. “This record is so fucking sexy, I can’t deal,” Walker says of Ruby Red. “Put it on and turn out the lights.”

Ruby Red deals with love, life and lust in the modern world, unveiling an eclectic fashion ranging from Southern gothic to slow-burning soul and pop noir. Make sure to give this wonderful album some spins, and also check out her killer playlist made exclusively for TIDAL, including comments on each track.

When I first heard this song, I felt like crying and dancing, and I did just that.

Jake Bugg: “Simple As This”

About five years ago, my band HONEYHONEY opened for Jake for about three months. I watched his set almost every night and never got sick of it. This song is one of my favorites.

The Be Good Tanyas: “Out of the Wilderness”

I love this band so much. I saw them play at the El Rey Theater in LA over 10 years ago and stood in the crowd loving them so much and wanting so badly to be on that stage one day. I couldn’t help but felt their presence when HONEYHONEY had our record release for our 3rd album at the El Rey.

Margaret Glaspy: “You And I”

It is very difficult to pick just one song off Maragret’s last record as they’re all SO DAMN GOOD. This song especially, is the titties.

Had to throw this heartbreaker in there… Oh life!

The first time I heard this song I listened to it like 8 times in a row. I think this record is one in a million. I listen to this as much as I listen to Ziggy Stardust.

Erykah Badu: “Kiss Me On My Neck”

I love how fucking brave Erykah Badu is. She inspires me so much.

By far, one of my favorite voices out there. When coming up with my idea board for my new record produced by Butch Walker, I referenced this song for inspiration and he said “Ummm, I produced that record.” I’ll call that a win right there.

Led Zeppelin: “In My Time of Dying”

What is there to say other than this is all you need for optimum rocking capacity.

Band of Skulls: “Light Of The Morning”

An old boyfriend turned me on to this band. The relationship didn’t last, but the rock lives on.

I love this band and used to work at a BBQ restaurant in LA and listen to this record on repeat. Coincidentally I’m touring with Willie Watson from Old Crow this fall and am STOKED about it.