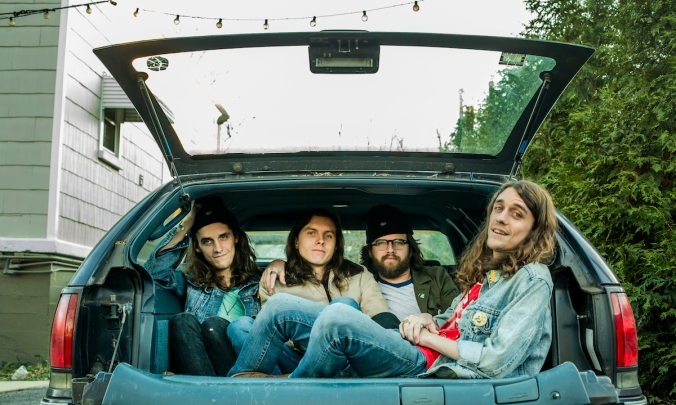 The Weeks make energetic, back-to-basics southern rock. Comprised of identical twin brothers Cyle and Cain Barnes, Sam Williams and Damien Bone, the band grew up in Jackson, Mississippi and formed back in 2006 while attending high school. They quickly gained notice as bearers of the southern torch, making a seamless mix of contemporary southern swagger and modern indie, touring with the likes of Kings of Leon, North Mississippi Allstars and Meat Puppets while amassing a huge fan base.

Recorded over the course of two weeks at Memphis’ legendary Ardent Studios with producer Paul Ebersold, their slick and streamlined follow-up, Easy, is out now

We hooked up with the band for a chat about the new album. 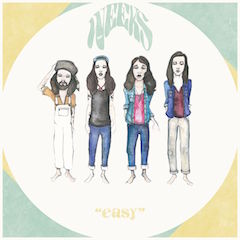 Congratulations on another great album. What do we get on Easy and what’s it about?

With Easy, we tried to make our most cohesive record to date. We spent a lot of time pow-wowing over what we do best and how to improve on it to be as efficient as possible with our songwriting. It ended up being about exactly that.

We were watching a lot of bands break up because they couldn’t look around the room and be honest. We were trying to proactively attack the usual problems that start to knock bands down after 10 years together. We definitely made our best record to date.

Did you have a clear idea or vision on how Easy should be from the get-go, or did it develop along the way?

It took a few turns here and there for sure. We spent a summer literally having slumber parties and writing all different types of music. Escaping the reservations of creating a 10-song album always helps the process stay organic. We wrote about 30 songs so it wasn’t until the final track listing that the picture came together.

We knew from early on though that we wanted a straightforward, glammy record with minimal instrumentation and chord changes, unlike our last record Dear Bo Jackson.

Nashville seems the place to be these days. Why did you relocate there, and has this move affected your music in any way?

When we moved here in 2010, the ‘It-factor’ had not quite taken place. We were looking to get out of Mississippi before we got complacent and comfortable at home. L.A. was too far, we were too young to survive in N.Y.C. and Chicago is too cold…but Nashville had sweet tea.

The only way it’s affected our music is by the amount of inspiration we’ve gotten from our friends. This town has so many musicians doing incredible things it’s easy to take it for granted, but when you make an honest attempt to look for it, it’s everywhere.

What can you share about the process around the recordings and studio time this time around? And, how cool is Ardent Studios?

The producer we were working with cut his teeth under all the legendary producers at Ardent (Dickinson, Frye, Hammond) and we all agreed it was best to get out of Nashville to escape the everyday stresses that can make recording feel like a job. We lost a little funding right before we left and had to decide if we wanted to call an audible and stay out, but we knew it had to be Ardent.

Having Jody Stephens from Big Star checking in, Luther Dickinson dropping off old reel to reels from his dads studio, staring at Tommy Stinson’s vomit stains on the wall, you can’t escape the rock and roll juju that permeates those halls.

What kind of feelings or sentiment do you hope leaving for the listener after he or she has worked through Easy?

I want people to immediately want to turn the record over and go again. There’s hidden details in the subtleties. Memphis is good at that.

Please describe the scene of the perfect listening session for the album.

In a 1991 Dodge Cummins Diesel, one friend on the bench seat driving Highway 61 between Rolling Fork and Clarksdale, MS. Shirts not allowed of course.

What meal or beverage would you pair with your album?

What’s the most perfect album ever made and why?

The Band: The Band. It just is. It’s science.

How do you view the status of the album format in 2017?

I think it’s as relevant as ever. Obviously there are circles of the industry where it’s non existent, but I think the hip hop albums of the last few years and the uptick in vinyl sales have really been the impetus for the albums continued relevance.

What are your next moves for this year?

Mostly just touring the U.S., U.K. and E.U. Hoping to get to Australia and Asia too. We’ve still got a big pile of songs from the Easy sessions that we’ll probably release in some form or fashion.