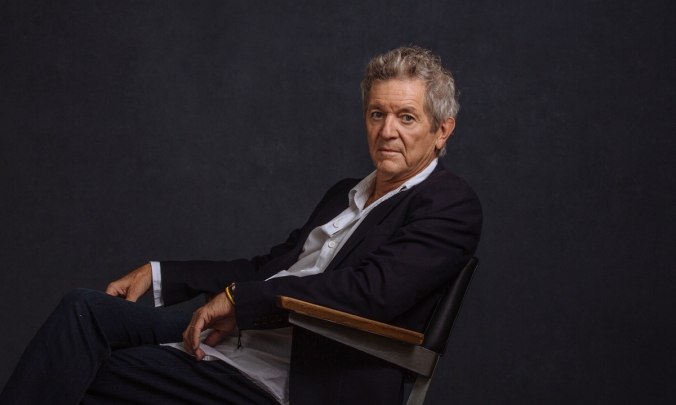 In one of the many memorable scenes of the pivotal music documentary Heartworn Highways, we’re invited into Guy Clark’s Nashville home on Christmas Eve of 1975.

Gathered round a table packed of booze bottles and cigarette butts, we get a raw, close glimpse of some of the prime country outlaws of the time, a joyous, drunken party including Clark and his wife Susanna, Steve Young, Richard Dobson, a young Steve Earle – and of course, Rodney Crowell.

Rodney Crowell blew into Nashville from Houston in 1972, and immediately soaked up the vibes of Music Row and its backstreets. Nashville was by then already well known for luring musicians, poets and artists of all kinds like moths into headlights, and in the early 1970s it hosted one of the most vibrant music scenes of the world.

In this vital and competitive environment, Crowell worked hard and learned fast, and soon turned into a fixture of the scene. He first earned reputation as a renowned songwriter, backing singer and musician in Emmylou Harris’ Hot Band, and eventually as a highly acclaimed solo artist. His classic debut album Ain’t Living Long Like This – a title he’s long rejected – dropped in 1978, and the big commercial breakthrough occurred a decade later with the brilliant Diamonds & Dirt.

Crowell is widely recognized as one of the forerunners of the 1980s new traditionalists movement, and along with his Nashville cohorts of the early 70s, he set the template for what is today known as Americana. As he recently stated when talking about his new album: I have declared my loyalty to Americana. It’s a hard category for people to get their heads around, or at least the terminology is. But all the people who represent it – Townes Van Zandt, Guy Clark, Lucinda Williams, Steve Earle and more recent stars like John Paul White and Jason Isbell – share a common thread. Whether they are actual poets or their music exemplifies a poetic sensibility, generally speaking, the Americana artist shuns commercial compromise in favor of a singular vision. Which resonates with me.

So many artists have appreciated and benefited from his songwriting skills over the years, including Johnny Cash, Waylon Jennings, Bob Seger, Keith Urban and Alan Jackson. He’s been awarded with two Grammys, he’s a member of the Nashville Songwriters Hall of Fame and the recipient of the 2009 Lifetime Achievement Award for Songwriting from the Americana Music Association. And even as great as he was in the earlier days, his musical career has only gets better with age.

Aside from his eclectic musical approach, Rodney Crowell’s undisputed strength as a songwriter balances equally on personal recollection and literary sophistication. The final song on Close Ties is entitled “Nashville 72,”, a songs that takes us back to the heydays and some of the finest singers and songwriters ever, friends and sources of inspiration like Townes van Zandt, Mickey Newbury and David Olney. In the song, Mr. Crowell dwells back to those times when:

‘I first met Willie Nelson with some friends at a party / I was twenty-two years old and he was pushing forty / There was hippies and reefer and God knows what all I was drinking pretty hard / I played him this shitty song I wrote and puked out in the yard / Old School Nashville, Harlan Howard, Bob McDill / Tom T. Hall go drink your fill and blow us all away….’

Close Ties is a loosely based conceptual album where Crowell reflects on his past, back to his less glorious childhood days in East Houston, moving to Nashville, making friends and losing lovers. It’s a life story wrapped into one album, with songs written around the 2016 passing of his close friend, mentor and fellow Texas troubadour Guy Clark, preceded by his wife and close associate, Susanna Clark, a couple years prior: “I found my way around this town with a friend I made named Guy/Who loved Susanna and so did I…”

In the centerpiece songs “It Ain’t Over Yet,” Crowell duets with his former wife Rosanne Cash, on what is the first time the two appears on record together since Cash’s 1990 album Interiors.

It ain’t over yet, ask someone who ought to know
Not so very long ago we were both hung out to dry
It ain’t over yet, you can mark my word
I don’t care what you think you heard, we’re still learning how to fly

Close Ties is a personal, poetic and profound experience, written by someone who used to be a kid learning from the giants and now is a legend himself. Crowell manages not only to look back, but also look ahead, continuing to extend the path carved out by the songwriters who preceded him.

We asked Mr. Crowell to share with us 5 albums that changed his life, and are utterly proud to share his picks with you: 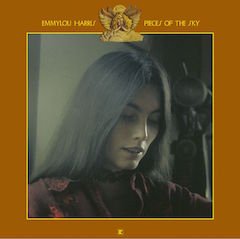 Emmylou Harris: Pieces of the Sky

Emmylou’s first album opened with a song of mine called “Bluebird Wine.” Because of her popularity, many more recording artists started covering my songs. It was Emmylou who facilitated my moving to Hollywood. Forty-plus years later, we’re both still rolling along.

My father was an excellent country singer. However, he never made a record. Therefore, I have to place in the number two slot the stack of Hank Williams 78rpm singles that, from the age of three, I played constantly on a small, portable record player. Hank’s songs and the sound of my father’s voice furnished the soundtrack to my childhood. 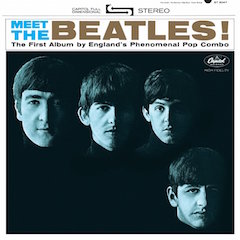 Like so many working musicians today, in 1964 I watched The Beatles perform on the Ed Sullivan Show and bought the album the very next day. If you weren’t alive in the early ’60s, it’s hard to grasp just how deeply The Beatles affected the global psyche. Their music affected a paradigm shift in an entire generation’s consciousness. I, like so many others, became convinced that playing music was the most effective way to attract a girlfriend. With that in mind, I hijacked my father’s guitar, learned to play, and never looked back. 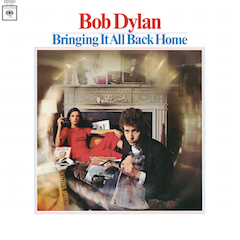 Bob Dylan: Bringing It All Back Home

A year-and-a-half after The Beatles took America by storm, Bringing It All Back Home hit the streets, instantly infusing the mid-’60s narrative with an adult dose of plutonium. It took my friend and I two days to get past “Subterranean Homesick Blues,” the album’s opening cut. From then on every song worked as primer for the apocalyptic last track, “It’s Alright Ma I’m Only Bleeding.” Whereas the Fab Four inspired a transformation within the existing social and cultural structures – mainly by framing teen angst with broad-stroke love songs – Dylan transformed the ongoing transformation. Certainly The Beatles took notice. Soon after their songs began taking on a more surreal slant. As did the culture. Change complete. 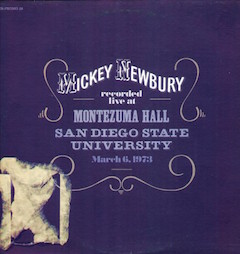 When Guy Clark turned me onto this superb album, I was in a quandary about how to approach the kind of lyric writing I was hearing from gruff baritones like Guy, Townes Van Zandt, Jerry Jeff Walker and Kris Kristofferson. At the time, I was a natural tenor and worried I’d be forever without the kind of vocal gravitas my contemporaries used to convey their poetic sensibilities. The sound of Newbury’s voice was more in the vein of Roy Orbison. And yet his poetry was as profound as any of the songwriters I just mentioned. After a nine-month period during which I listened almost exclusively to Live At Montezuma Hall, I began writing songs like “Till I Gain Control Again” and “After All This Time.” It would take a couple of decades before I found the true center of my voice, but my ongoing study of Newbury’s singing and songwriting gave me the courage to soldier on.

Close Ties is out now through New West Records.