Chris Eckman has been on a musical quest his whole life, restlessly walking untrodden paths from the Pacific Northwest to the African desert and beyond.

His lifelong journey is paved with passion, not fame and fortune. A career marked by open-mindedness and praiseworthy craftsmanship on all levels, whether as a highly underrated singer and songwriter, producer or label manager. It’s an honor to present the musical world according to Mr. Eckman and to talk specifically about his exciting work with the label Glitterbeat – a home for vibrant global sounds. But first, we need to introduce him properly.

Chris Eckman rose to fame in the 1980s as one of the core members of the beloved and now defunct Seattle rock band The Walkabouts. Together with his main band partner Carla Torgerson, The Walkabouts started out combining introspective jangle pop with dark and moody folk rock on brilliant albums like Scavenger (Sub Pop, 1990) and New West Motel (Sub Pop, 1993). The band gradually expanded their sonic palette, widening their musical horizons to encapsulate a more cinematic sound while simultaneously conjuring “European elegance” on albums like Devil’s Road (1996, recorded with Warsaw Philharmonic Orchestra) and Nighttown (1997). reminiscent of the musical landscapes of Tindersticks, Nick Cave and Leonard Cohen.

Eckman & Torgerson also started up the mainly acoustic offshoot Chris & Carla, a project following somewhat in the footsteps of their mother-band as equally at home playing with anyone from Greek folk musicians to members of R.E.M and Camper Van Beethoven. In the early 2000s, Eckman relocated to Ljubljana, Slovenia, and has kept more than busy on European soil as a solo artist and producer, making music for films and more while also working with the somber trio Distance, Light & Sky.

In the mid-2000s, Eckman founded Dirtmusic with Hugo Race (Nick Cave and the Bad Seeds) and Chris Brokaw (Codeine, Come). What seemed at first to be a desert band rooted in the US frontier tradition soon transformed into something else when they hooked up with Tuareg band Tamikrest while on a trip to Mali. Says Chris Eckman in our interview: “I had listened to a fair amount of African music and reggae and dub in the early 80’s and I found myself increasingly returning to that. And then I went to Mali to travel in 2006, and that sealed the deal. After that there was no looking back.”

Enamored with his experience, Chris Eckman finally formed the Glitterbeat label in 2012 together with Peter Weber (former manager of Tamikrest and head of the German imprint Glitterhouse) in order to release records that embrace both evolving global textures and localized roots traditions. In their own words: Glitterbeat specializes in vibrant global sounds from Africa and beyond.

Though Glitterbeat only just released their first album back in 2013, the label has already established itself as a noted home for music originating from outside of the Western hemisphere as a result of releasing albums by the likes of Tamikrest, Aziza Brahim (Western Sahara), Noura Mint Seymali (Mauritania), Bassekou Kouyaté (Mali) and Bixiga 70 (Brazil). The label has won the WOMEX Label Award in 2016, 2015 and 2014 to date.

Chris, can you please offer a brief history of Glitterbeat and how it came to life?

My band Dirtmusic went to Mali in 2008 to play the famous Festival au Desert, which used to take place deep in the Malian desert every January. My Glitterbeat partner Peter Weber came with us and during that brief trip we met a young Tuareg rock band called Tamikrest. That changed everything. Peter ended up managing Tamikrest and signing them to his other label Glitterhouse and Dirtmusic and I returned to Mali in 2009 to record a collaborative album with Tamikrest called BKO.

Peter and I returned to Mali a couple more times to produce records, and from those experiences we began to develop an idea to make a label dedicated to this fabulous music we were encountering and working with. 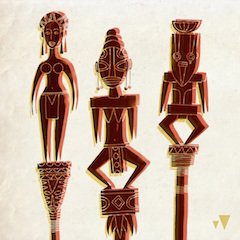 What motivated you to launch the label in the first place?

I think the motivation was, in part, that we thought we could do a bit different type of label. A label that embraced global musics as contemporary sounds and not as decidedly folkloric or traditional or “other.”

Of course, some labels had taken similar approaches in the past but we thought there was room for a fresh take on that idea. Also we wanted to fight hard to have our artists featured beyond specialist “world music” media outlets. In fact, we consciously never use the words “world music.” We feel there are too many biases built into that term at this point.

There is no reason that artists like Tamikrest or Noura Mint Seymali or Aziza Brahim shouldn’t be featured in rock magazines or on portals that usually cover indie or experimental music. We certainly have proven this is possible, or should I say, our artists have made that possible. They of course make the music that crosses these borders.

What other labels, if any, where role models or guiding stars when you started up, and why?

Certainly Real World has been groundbreaking and influential. They did so much to introduce global sounds into the western consciousness. Also I really admire the fearless approach of smaller imprints like Sahel Sounds and Sublime Frequencies. Both of those labels have a very punk rock attitude. They are not obsessed with watering the music down; in fact, they celebrate the rawness. I think they helped to create an essential reset of people’s expectations about global music.

Too often the approach had been to market genteel, coffee-table versions of ethnic music. Some of the newer labels have worked hard to overturn all of that. We certainly align ourselves with this new turn.

What does Glitterbeat represent or stand for as an institution?

What, in your opinion, is the greatest achievement in the history of Glitterbeat thus far?

I think making it through the first year was a big thing. We didn’t know if we were going to eventually release 3 records or 30. We started with a very open concept. By the end of 2017, we will have released 50 records.

But I think the biggest accomplishment has been to create a place that artists want to be a part of. That feels really satisfying. The more it feels like a family, rather than a cold and calculating business, the more we are satisfied. And I think at the level we are at, that is also good business sense. It is a very chaotic and quick changing industry and the more connected and supportive we all are; the better the chance is that we will collectively survive.

What makes you decide whether or not to work with an artist and/or release an album?

The first criteria are really simple: do we love the music and do we think it is music that stands apart from the crowd – is it luminous? Is it undeniable? After that we start asking business questions, but there are more fundamental questions than whether or not we think it will sell. Lots of strange music has sold in reasonable quantities.

But average music doesn’t stand much of a chance to surprise. We try and stay away from average.

What attracted you to music outside of the Western Hemisphere in the first place?

I think it in part came from an exhaustion with the deluge of western music that all starts to sound the same. Heavily codified genres that spend a lot of time cannibalizing the past. I had listened to a fair amount of African music and reggae and dub in the early 80’s and I found myself increasingly returning to that.

And then I went to Mali to travel in 2006, and that sealed the deal. After that there was no looking back.

Where, in your opinion, are the most interesting areas of the world for music today?

I think the flame is burning hot in many places right now. The African urban music scene is growing fast and is, for the first time, regularly turning out both hip-hop and electronic sounds that have their own regional vibe. Global and local at the same time. That is a scene that is going to grow fast in the next years and will become every bit as influential on the direction of music as scenes in Berlin, Los Angeles or London are.

Are there any undiscovered territories that you’d like to discover further?

It is hard to talk about “undiscovered” territories in the 21st century – we are all so inter-connected that even the most remote regions are tapped into the global conversation.

But certain musical regions are better documented than others. I recently heard some ritualistic music from the Banga people who live deep in the desert of Tunisia. It sounded completely new to me. It sounded like something I would like to hear more of.

At least for now, it seems we have too many ideas as opposed to not enough. Our release schedule for 2017 is already filled up. Look for new releases from Tuareg rockers Tamikrest, a fabulous career-spanning compilation from Turkish psych-pioneers Baba Zula, a new futuristic Arabic roots album from Tunisia’s Bargou 08 and a wild, punchy new album from King Ayisoba from Ghana. And that takes us to April 1st. It is going to be another busy year.

Where can folks experience your music in the near future?

On TIDAL of course, but also via LPs and CD. We are still committed to putting out physical music, at least for now. And, of course, many of our bands are on tour. In the winter Baba Zula will be doing a big European tour and Tamikrest will follow in April.

We asked Chris Eckman to select and annotate a couple albums that tell the story of the label:

This was the album that really helped to get us off the ground. My Glitterbeat partner Peter Weber and I met Tamikrest in the Malian desert at the famous Festival au Desert several years ago. That meeting in a sense created the whole idea of idea of Glitterbeat, and it was incredibly satisfying that some years later we were able to release this beautiful, innovative album.

Aziza Brahim is a deeply political artist. Here artistic voice is entirely dedicated to the struggle of the displaced Saharawi people, who call Western Sahara their home.

I have produced both of her Glitterbeat albums and Soutak had an unprecedented run of three months at #1 on the World Music Charts Europe. 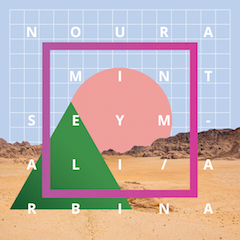 This is Noura’s second album, and along with her first, Tzenni, it is certainly an international breakthrough for Mauritanian music, music that until recently has been all but unknown outside of the country.

Noura performed on the Syrian National Musicians tour this past summer at the invitation of Blur’s Damon Albarn and Arbina has been on a slew of year-end best-of-2016 lists (The Wire, NPR, Mojo, The Quietus, Uncut ect.).

Gaye is a young Turkish singer who lives in Istanbul. She is in equal measure influenced by Nirvana and the legendary Turkish innovator Selda Bagcan. Glitterbeat released her first international album in November and the response has been phenomenal.

Her music, in part because of its surrealistic and psychedelic motifs, is seen as a potent critique of Turkey’s current political moment.