A longtime fan of ’80s hardcore (MDC, DRI, Discharge), Digby was deeply involved in the underground music scene early on — working as a roadie, writing for fanzine Maximum RocknRoll and doing promotion for bands on the road. His obsession with rock and roll in its hardest and heaviest forms eventually materialized into starting his own label, which he began from his Nottingham, England apartment. 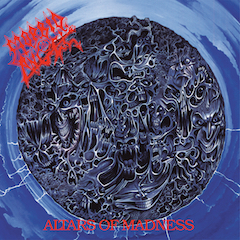 Focusing on the more extreme outskirts of metal, Earache immediately struck gold with Birmingham grindcore pioneers Napalm Death, releasing their groundbreaking debut, Scum, in 1987. As records sold, Earache gradually grew into a more organized business, and soon incorporated Florida’s Morbid Angel, Sweden’s Entombed and Liverpool’s Carcass into it roster, while expanding beyond its grind and death metal origins to include other extreme sub-genres like industrial metal (Godflesh), doom (Cathedral) and stoner (Sleep).

By the early 1990s, Earache Records was the unequalled leading label for extreme metal in all shapes and forms.

And as metal started to gain audience with a larger public, several major releases found their way onto worldwide album charts. 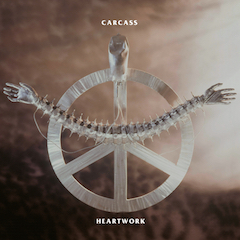 Earache struck a U.S. licensing deal with Sony Music in 1993, but disappointing sale figures turned it into a short-lived venture. As it turned out, the mainstream masses weren’t quite ready for the extremes after all. Earache came out wounded in the aftermath, with many of the most important bands signing deals with major labels: Carcass to Sony, Morbid Angel to Giant, Entombed to EastWest.

Not easily broken, Earache refortified around its fiercely independent status and strong, extensive back catalogue. After the Sony deal, they once again scored a big-time signing with Swedish melodic death metal band At The Gates, and continued to branch out the label’s musical roots with such acts as cyber-techno-band Ultraviolence and reggae-punkers Dub War, who scored a Top 5 hit in the U.K.

By the turn of the millennium, Earache Records was more vivacious than ever.

The Wicked World imprint was founded to foster underground metal talent, such as Decapitated and Hate Eternal, while still developing breakthrough bands like Swedish super-group The Haunted, Norwegian dark-goth Mortiis and Australian grind mutants The Berzerker.

Earache was the central catalyst in the metal explosion of the new century despite having no direct involvement in the new set of bands conquering the album charts (Slipknot, Nightwish, Hatebreed), sticking to bands with a more individualistic takes on the extreme metal ethos and having modest success with acts like Mortiis, Cult of Luna and veterans Deicide, who signed to Earache after their long stint with Roadrunner.

Deicide’s 2004 debut for Earache, Scars of the Crucifix, returned the label’s name to the American Billboard charts and went on to be Earache’s best-selling album in years. Toward the end of the decade the label incubated a thrash metal renaissance, with bands like Evile and Municipal Waste enjoying worldwide success.

The signing of Rival Sons in 2010 signaled a move into the commercial rock, and a new era of success has ensued. Since then, Earache has shifted gears to sign and release more widely appealing rock and roll, with acts like Blackberry Smoke, which joined the party in early 2014, and The Temperance Movement, who signed in summer 2013. The two most recent additions to Earache’s roster – Kagoule and Biters – epitomize Earache and Digby’s willingness to evolve and reinvent.

Known worldwide as the label for all things extreme in music, Earache’s contribution to the underground scene is immense.

They’ve signed a stunning number of leading and innovative acts in their nearly three-decade run, selling millions of records while remaining a wholly independent and loyal to the up and coming bands.

As Digby Pearson says in our below interview, “We stand for taking wholly unfashionable scenes and underdog bands, and making them household names. The prevailing trends we generally ignore. I’m attracted to bands that stand out like a sore thumb, those pushing against the grain.”

How did you get into the music business in the first place?

I got into music first, business second. Purely as a fan, helping out local friends in bands, from behind the scenes, promoting pub shows, zine, roadie, everything. It was the DIY punk/hardcore scene that welcomed all comers. The feeling was “anyone could have a go,” so I did. I promoted Napalm Death’s second-ever show, four years before I released their debut album.

What labels where your own role models or guiding stars, when you started up?

Labels in the HC/punk scene were my education: SST, Dischord, Clay… and John Peel of BBC Radio 1, of course. Aside from that I was a fan of Def Jam as it was created. I watched from afar, transfixed – the whole street level ethos of the label, even though it was early hip-hop genre. I kinda tried to replicate that ethos for Earache, minus the gold chains… [laughs] Rick Rubin is a total hero of mine.

What does Earache stand for as an institution?

We stand for taking wholly unfashionable scenes and underdog bands, and making them household names. The prevailing trends we generally ignore. I’m attracted to bands that stand out like a sore thumb, those pushing against the grain.

In your opinion, what is the greatest achievement in the nearly 30 year history of Earache?

Giving anti-establishment bands a voice, and a platform. The now-thriving global genre of ‘Extreme Metal’ was pretty much born during the explosive first 20-odd releases of the label, out of a bedroom in Nottingham. I released all the major players, one after another.

What’s the secret behind keeping the spirit alive for such a long time?

Just being positive and enthusiastic about music 24/7. Even almost 30 years on, I crave new sounds and listen to new bands daily. I’m really into new young bands playing blues-rock and southern rock these days, several of the signings hit the U.K. Top 10 and European charts in last two years: Rival Sons, The Temperance Movement, Blackberry Smoke.

Did you have an initial idea back then on what Earache should be and how it could evolve in the future?

No lofty ideas at all, except to deafen people with noise! It’s not what you’d call a business plan, but the single-mindedness of purpose is what I guess attracted fans to the sound.

What makes you decide to sign a band or not?

Again, having an absolutely contemporary sound is what gets my attention, which is often not the prevailing trend. It helps that Earache is 100-percent independent — no one has any stake or input on the label. We do what we damn well want. Bands have absolute creative freedom, which some have only come to appreciate once they moved on.

Napalm Death
Scum (1987)
Unprecedented at the time in ‘not giving a fuck.’
It kick-started the extreme metal genre.

Scorn
Evanescence (1994)
Ex-members of Napalm Death experimenting with samples, drum loops, and deafening dubby bass-lines.
Way ahead of its time. Made in ‘95, sounds contemporary even in 2015.

Rival Sons
Head Down (2012)
Bluesy rock from Long Beach, played with an intensity and honesty that electrified the corpse of rock ‘n’ roll in recent years.

The metal scene and the music itself have gone through various mutations over the years. In what way does these changes reflect the history of Earache?

Yeah, Earache has been in the midst of most of the metal scenes and micro genres over two decades. We swerved a couple of scenes — gothic metal, nu-metal — as they weren’t to my tastes, but in hindsight that was probably a bad decision as they became the biggest metal sellers of recent times. Oops.

The music industry also goes through changes. How have those challenges affected you?

Obviously the digital revolution is changing things as we speak. Downloads and now streams; we’ve seen it coming, luckily, so we adapted with plenty of time.

I honestly would have decided to sign commercial-ish music earlier, instead of waiting 25 years.