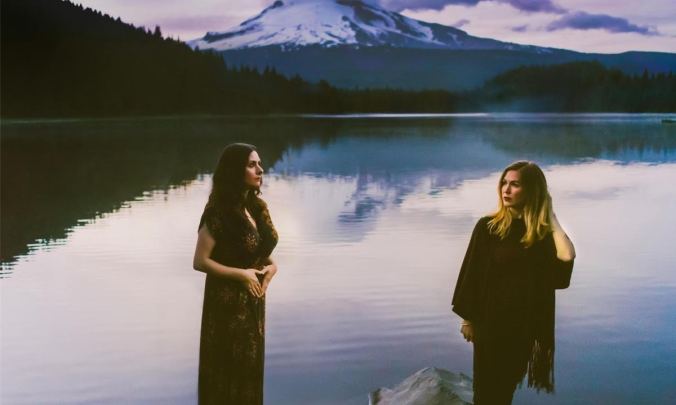 Folk-pop outfit Lenore. is the story of two trained singer-songwriters about to withdraw from the music scene: Rebecca Marie Miller following her time as harmony vocalist in The Mynabirds and Joy Pearson burning out after a recent divorce.

But the two stumbled into each other at a show (a Pokey LaFarge gig) and hit off immediately, bonding over music, cigarettes and late night cocktails. Just a couple days later, Lenore. was born under the cheekily term ‘witch folk’. Things started to roll, and they’ve already started to stir some buzz in the Northwestern indie hub of Portland, described by both as a wonderful and supportive musical community.

So far, only two singles have been launched from their forthcoming full length debut (slated for a September 15 release), Sharp Spine, a gorgeous collaboration with Eric Bachman from Archers of Loaf and “Ether’s Arms”.

A sneak listen to their forthcoming album reveals a band deeply committed to strong and timeless songwriting, calling upon the husky vibes of Fleetwood Mac, the intimate wonders of Simon & Garfunkel or the ethereal bliss of Enya, all wrapped around the majestic scenery of the Pacific Northwest.

In anticipation of the new album, we hooked up with Rebecca and Joy to talk about their album, their favorite duo of all time and how their music is most comparable to a tree.

Lenore. is the musical baby of singers and songwriters Rebecca Marie Miller and Joy Pearson. Our other full time members are Edward “Shredward” Cameron on the classical guitar and Jessie Dettwiler on cello.

What can you share about what your brand new single, “Ether’s Arms” and your forthcoming album?

Our newest single, “Ether’s Arms,” is a great representation of our darker, moodier, and more emotional work. It’s the perfect juxtaposition to our first single, “Sharp Spine”, a.k.a. ‘the feel good song of the summer,’ according to our Moms. The album explores that relationship between the light and the dark, with particular emphasis on the cyclical journey through both spaces.

“Sharp Spine” is a duet with Eric Bachman from Archers of Loaf. How did that collaborations came about?

Eric had been begging us for years to sing on one of our songs; it was exhausting… Kidding! We were fortunate enough to do some shows with Eric in 2016. Friendships were forged, and he happens to be a songwriting hero of ours. It was slightly terrifying to ask him to do Sharp Spine, but so dreamy to have him say yes.

What was your initial idea for the album, and what inspired you the most while writing songs for it?

The theme of the album is certainly centered around that relationship between light and dark and the traverse through those spaces that we all experience. When approaching how we wanted to record, we knew that we wanted to capture our live sound, but we also wanted to grow into a brand new sonic space that only experimenting in a recording studio affords.

How was the recording process? You worked with John Askew. How did his production duties help shape the album?

We were so fortunate to work with John, as well as stellar players Dave Depper, Dan Hunt, and Paul Rigby. Everyone came to the table with great ideas and open hearts and minds. Several of the songs on the album had never been performed live. They were completely shaped in the studio. John worked tirelessly never taking breaks, and his instinct for vibe is entirely spot on.

You’ve been described as witch-folk. What, if any, does such a term mean to you?

Witch-folk is a term we came up with in the very beginning of Lenore. that started off as mostly tongue in cheek, but hey, if the shoe fits! To us, it means folk music that has a dark edge and often leans into nature for inspiration and imagery. The effect of our singing voices combined has always felt a bit like alchemy; it’s felt like magic since the very beginning. #witchfolk

What would be your preferred setting to ultimately enjoy the LP?

Rivendell, upon returning from the fiery depths of Mount Doom after successfully destroying the one ring. Or, just in pajamas at home. Or on an approximately 40 minute road trip. All great options.

How would you pair the Lenore. LP with a meal or beverage?

Beverage over meal every time. Every. Time. So, varying incarnations of whiskey.

What’s your favorite duo of all time?

Definitely Obama/Biden. They are so missed.

Favorite debut album of all times and why?

Rebecca is still floored by Jeff Buckley’s Grace and Joy endured the rigors of puberty while listening to Fiona Apple’s Tidal. Jessie and Edward aren’t here to comment at this time, but we’re pretty sure that the Lenore. LP is their favorite debut album of all time. Right, guys?

If your music was a physical object, what would it be?

We’re a tree for sure: deep roots, wide branches, home to many, good for climbing, suitable for snoozing atop fallen pine needles, tire swing optional.